In 1968, when I was 14 years old and a 9th grader at Issaquah Junior High School, I had to come up with a Home Ec project.  As I remember it, we did cooking in the Fall semester and sewing in the Spring, and had to do one special project each semester.  For my cooking project, I decided to make the Thanksgiving meal, start to finish, for my family.  Of course, I followed my mother’s recipes and methods, which involved getting up early in the morning to prepare the bread stuffing,  stuff the turkey, and get it in the oven so that we could have our meal at 2:00 in the afternoon, our traditional Thanksgiving supper time.  I had never so much as cooked a chicken before (cookies and cakes were my realm).  I succeeded in the project, as you can see from the picture that my mother took that day, but I was pretty tired by the end of it all.

I have cooked many Thanksgiving turkey dinners since then, and I have changed a few things.  First of all, I don’t put the stuffing in the turkey any more.  The turkey cooks much more quickly when it is not stuffed, and it is easier to get even cooking of the meat and a nice crisp skin that hasn’t steamed from the stuffing.  So that is a step in the easier direction.  However, I have also added an extra do-ahead step of brining the bird overnight  before roasting, which I find makes the meat taste better and stay moister. 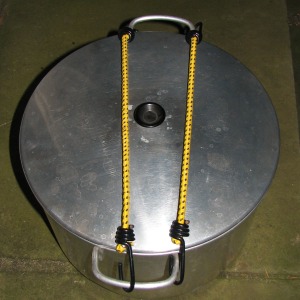 Brining involves getting out a cooler or large pot big enough to hold the turkey, the brine , and some grocery bags of ice to keep it cool during the night.  For a smaller turkey, I find that my large canning pot is just big enough. I set the container of turkey in brine outdoors for the night, just outside the kitchen door, with something heavy on the lid, or bungie cords to secure it, just in case some raccoons happen to investigate.  I used to put the turkey and brine in the garage, but that involved carrying everything up and down steps, so now I take the risk of putting it on the side porch outdoors. Of course, if you have a big refrigerator, and it isn’t full of other Thanksgiving groceries, you can brine the turkey there.

The next day, I rinse the salt off the Turkey, and it is ready for roasting.  But since we eat a little later in the day now, there is no big rush.  I make a pie in the morning, bake rolls and prepare a “stuffing” to be baked in a separate dish, but I don’t start roasting the Turkey until after noon. 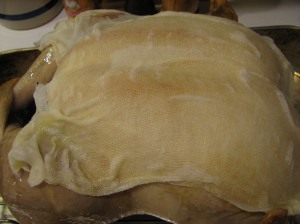 To keep the turkey breast moist, I cover it with a butter-soaked piece of cheesecloth during most of the roasting time.  I also baste frequently, just because I kind of enjoy it.  I remove the cheesecloth before the turkey is finished roasting, so that the skin can brown nicely.

The evening before Thanksgiving, I also make a turkey broth out of the neck and giblets (excluding the liver, which I like to sauté in butter for a little lunch treat on Thanksgiving day).  I use the turkey broth for moistening the stuffing and for making gravy.

It doesn’t make sense to me to wait to post a recipe for Thanksgiving Turkey after the big day, so I will post now, and update with new photos after the holiday.  Cooking the meal can be a very enjoyable way to spend the Thanksgiving holiday, but best of all is sharing the meal with your family and friends.

Brining:
Dissolve 2 cups Kosher salt in 2 gallons cold water in a large container.  Add the turkey and refrigerate or set in a very cool spot overnight.

Lift the turkey from the brine into the kitchen sink.  Rinse the turkey under cool water for several minutes until all traces of salt are gone from the cavity and skin.  Pat dry inside and out with paper towels. 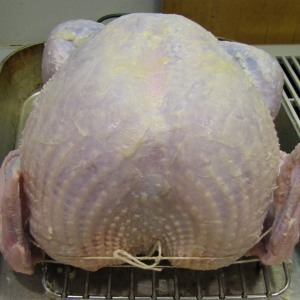 Loosely tie the legs together with cotton string.  Tuck wings behind back and close neck cavity with a small skewer.  Toss a few thyme sprigs into the main cavity.  You can add additional herbs if you like.  Brush the back of the turkey with 1 tablespoon of melted butter.  Turn the turkey over and brush the entire breast side with 2 tablespoons melted butter.  Place the turkey on a greased rack in a roasting pan.

Roast for 30 minutes, basting twice with any fat that has dripped into the pan.  An old fashioned bulb-type turkey baster is convenient for this.  Meanwhile, melt 2 tablespoons butter with 2 tablespoons vegetable oil in a small saucepan and put a large double-thickness piece of clean cheesecloth in the saucepan.

Reduce the oven temperature to 325°.  Cover the turkey breast with the butter-soaked cheesecloth.  Roast the turkey for 1 ½ to 2 hours (for a 10-12 pound turkey), basting every 20 minutes, until the juices run clear with the thigh is pricked, or when a thermometer inserted into the thickest part of the thigh registers 180°.  (Add an additional 15 minutes roasting time per pound if cooking a larger bird). Remove the cheesecloth for the last 20 minutes or so of cooking.

When the turkey is done, discard strings and skewer.  Baste once with the pan juices and tent the turkey with foil.  Let rest 20-30 minutes before carving in order to retain the juices.

Update 11/25/2010:
We had a delicious turkey dinner today.  I’ve added photos to this post, and I also have a few notes I would like to add:
1) I tied the wings close to the body of the bird with cotton string.
2) The piece of cheesecloth that I used was about 14″ long and 10 ” wide, and I folded it over once.  I also rinsed the cheesecloth before using it and let it air-dry for a little while before I put it into the melted butter.
3) The turkey did not give a lot of drippings, so I didn’t do much basting.  What did drip into the pan was salty, so I used just a little of the drippings in the gravy.

I hope you had a very enjoyable Thanksgiving!

This entry was posted in Holidays, Recipes and tagged brining, Thanksgiving, turkey. Bookmark the permalink.